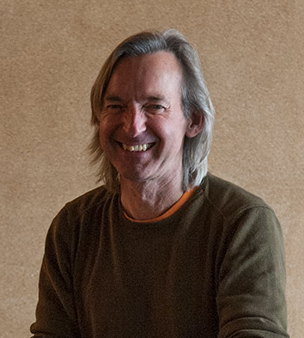 Howard left school in 1974 and joined a workers’ collective running ‘Uhuru’, a wholefood shop and café in East Oxford. Howard worked on local community projects pioneered by Uhuru. These included a pilot scheme working with persistent young offenders, helping them find a more positive way to contribute to their community.

Exhausted after a couple of years trying to change the world, Howard realised the need to change himself. His only tool was a little book called ‘Zen Flesh, Zen Bones’. This inspired him to search for the experience of ‘being in the moment’, whilst working as an organic gardener and oil rig steward in Scotland.

In 1979, encouraged by a work colleague, Howard set off overland to India. After some wonderful weeks hitch-hiking through Europe, he boarded the ‘Magic Bus’ in Istanbul, bound for Delhi. Unfortunately, he found himself in Tehran in the midst of the revolution. He then entered Afghanistan and witnessed Russia’s violent repression of resistance to the occupation.

The days of the Magic Bus ended in a deadly ambush on the road from Herat to Kandahar. That close encounter with violence and death fully woke Howard to the present and inspired a deep and lifelong search for meaning.

Howard’s acupuncture studies led him not into therapy practice but into twelve years of ‘fourth way’ studies under the guidance of some remarkable teachers. He retrained in Information Technology and joined British Telecom International as a Business Analyst. He studied dance (Limon technique), voice (Roy Hart Theatre), acting (Actor’s Institute and Jack Waltzer), physical theatre and yoga. That inner journey culminated in his performance in Sam Shepard’s play ‘Tongues’ at London’s ICA Theatre in 1991.

The following year, Howard was given a copy of Stanley Keleman’s book ‘Emotional Anatomy’. Inspired by Keleman’s ideas on Formative Psychology, he travelled to Belgium to join a five-day retreat that Keleman was leading. When he returned to England, Howard followed Keleman’s advice and started training in Integrative Psychotherapy at The Minster Centre.

In 1992 Howard learned Traditional Thai Healing Massage with Harry McGill of the School of Oriental Massage and started a practice at The Life Centre in Notting Hill Gate, as a means to fund his psychotherapy training. In 1994 he did an advanced training in Thai Massage with Asokananda.

Howard continued his psychotherapy training at the Karuna Institute where he studied Core Process Psychotherapy. It was here that he came to truly appreciate his skills as a therapeutic bodyworker. In 1996 he completed a post-graduate training in Craniosacral Therapy with Franklyn Sills while working as a body oriented Psychotherapist under the supervision of Dr Brenda Davies, a Consultant Psychiatrist and healer.

In 1997 Howard completed a Masters Degree in Therapeutic Bodywork at the University of Westminster under the tutelage of Leon Chaitow and Dr David Peters. Howard’s MA thesis discussed the significance of therapeutic listening both from a craniosacral and psychotherapeutic perspective. He suggested the possibility of a ‘memory of health’ to which the patient could reorient, given the right therapeutic relationship. Click here to read extract

Howard has also trained as a meditation teacher, in the tradition of Kashmir Shaivism, with Alexander Filmer-Lorch.

Howard has presented his work at:

Howard’s teaching career started in 1994 when he was asked to teach Thai Yoga Massage at Morley College in London. He also served as a course assessor for the London Open College Network, guiding other providers through the process of course design and accreditation.

In 1997 he was asked to teach Thai Yoga Massage at the University of Westminster. Although this course was originally designed for students studying within the School of Integrated Health, it attracted students from other faculties and provided a rare opportunity for knowledge exchange across departments. Howard continued to teach the course at the University until 2006.

Howard has written articles on Craniosacral Therapy for The Fulcrum (2006) and The Journal of Holistic Healthcare (November 2007).

Howard’s first book, ‘A Myofascial Approach to Thai Massage’, was published in 2009 by Churchill Livingstone. This groundbreaking book contributed to the emerging appreciation of the importance of connective tissue in health care. The book proposed that the ‘sen’ manipulated in Thai Massage and the ‘nadis’ stretched and opened in yoga practice can be better understood as myofascial pathways than as energy lines.

Howard was a regular reviewer of articles for the Journal of Bodywork and Movement Therapies under its editor, the late Leon Chaitow. He also advises the publisher, Handspring Publishing and writes fiction. His books can be found on Amazon.

Howard trained as a meditation teacher in the Kashmir Shaivism tradition with Alexander Filmer-Lorch in 2016. He currently integrates this into his yoga classes.

Howard trained as a Reiki practitioner in 1995. He became a Reiki Master and teacher in 2019

Howard runs courses throughout the year in Thai Massage and Craniosacral therapy depending upon the demand. He teaches in England, Spain and Croatia.

Howard can also be consulted in Mallorca