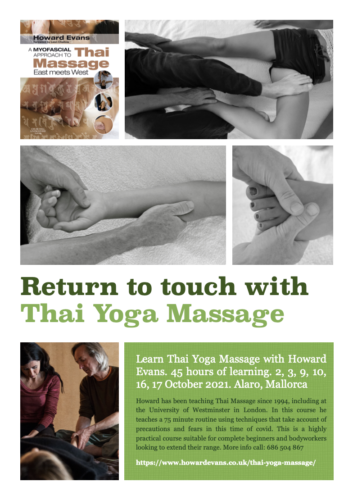 Traditional Thai medicine is based on the concept of a system of 72,000 channels called ’sen’ through which, it is said, energy is transformed and distributed in the human body. In Thailand much of the theory of this system has been lost. Of the little that remains there is a series of diagrams outlining the ten major sen used in Traditional Thai Massage. In the West these are often likened to the meridians used in Chinese acupuncture or shiatsu.

The myofascial approach to Thai Massage teaches the sen as myofascial pathways similar to those used in Structural Integration (or Rolfing). This approach brings clarity and simplicity of action to the massage allowing the practitioner to relax into the practice, and invite ever-deeper levels of relaxation and healing in the receiver.

Thai Massage is practiced on the floor. There is no need for oil so the receiver can remain lightly clothed. This makes it one of the most versatile and portable massage techniques available. Many of the techniques can also be incorporated into couch based massage routines.

This course is suited to experienced massage practitioners and bodyworkers who want to extend their repertoire as well as to complete beginners exploring massage with a view to work or simply to practice with family and friends.

Students will learn a complete one and a quarter hour routine suited to general practice with healthy patients.

The course also includes work on practitioner posture, breathing, rhythm, self-awareness, attention and concentration. The aim is to develop a style of massage as beneficial to the giver as to the receiver.